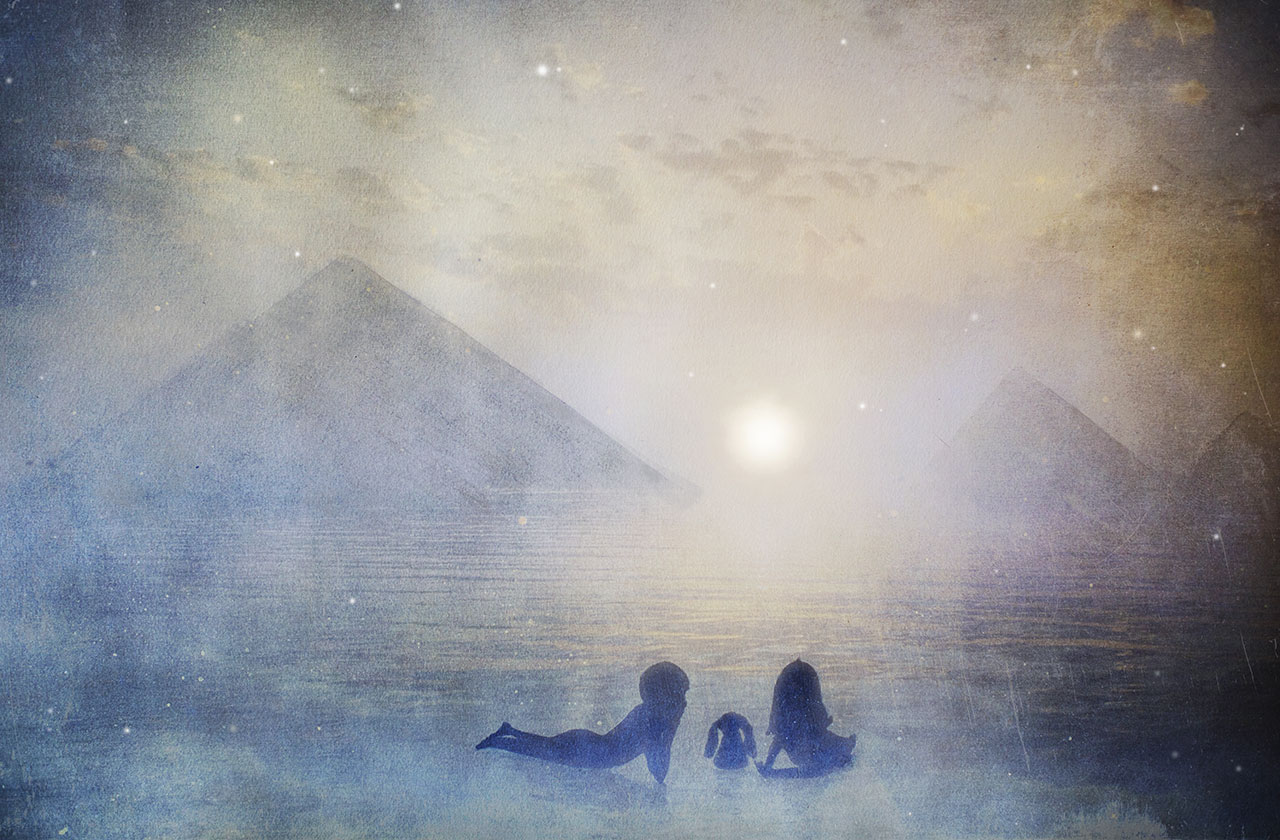 Illustration from The Boy and the Boy King by George H. Lewis and A.D. Lubow.

The sun rises between the structures we build over a lifetime. New chapters begin. As we pass the baton to our successor company, M+, headed by Nico Marcellino, it’s time now to take stock of what we’ve accomplished and the work still ahead.

Over the years, we have set the stage for Popes, presidents, bankers, educators, labor leaders, fundraisers, filmmakers, environmentalists, artists and all manner of imaginative minds, kind hearts and courageous souls. We have projected a view of the world through the hopeful lens of Inner-City school children, the prophecies of scientists and the art of masters no less than Kurt Masur, George Balanchine and Natalia Osipova, to name only a few. The Juilliard Quartet came to our offices to play for our 25th Anniversary.

The enterprise, when still called William Altman Advertising, helped Philippe de Montebello become the voice of the Metropolitan Museum. Its print and radio ads promoted two of the top three most attended exhibitions at the Met — The Treasures of Tutankhamun and also the Vatican Collection: The Papacy and Art.  The Tut show alone was enjoyed by 1,360,000 visitors. Our “Art of Diplomacy” ads, sponsored by Sara Lee Corporation, promoted the first exchange of art between the Soviet Union and the United States. Could art be a way to wage peace instead of war? We’ll continue to work on that. Toward that end, please read The Boy and the Boy King available now on Amazon.

We’ve kept above politics. Yet, we wrote the funniest two jokes at the 2016 Trump/Clinton Al Smith dinner. We’ve celebrated the mighty and the meek.  We reminded the world of Roosevelt and Rockwell’s four freedoms. A widely-viewed video created for Marymount Manhattan College honored the women of Bedford Hills Correctional Facility who had the courage to earn their College degree while still in prison. By the seat of our pants and the flight of our imagination, we kept MMC from closing back in the ’80s; and stuck with them for 40 years. For a wide assortment of clients, we raised hundreds of millions of dollars via thousands of gifts, but none more important than the $25 sent from prison to the Inner-City Scholarship Fund accompanied by a note too troublingly touching to get into right now. We were there when Misty Copeland, as both the White and Black Swan in Swan Lake, fluttered onto and, as it seemed, beyond the stage of the Metropolitan Opera House. Ms. Copeland had gone from living in an SRO apartment as a child to an SRO performance at the Met.  The stage was alight with the drama of high art and everyday life.

We’ve had a forty-two-year relationship with Columbia University, beginning with Columbia Business School and continuing with Columbia School of Professional Studies, SIPA Columbia School of the Arts and others. We created highly effective films for Columbia film School as well as Columbia’s graduate programs in Writing and Acting. We were with The New York Philharmonic for three highly successful years until 9/11 when even paid ticket holders stopped attending. We were in our 53rd floor offices on September 11 when the planes passed by our window. It was a time when fear and terror seemed to defeat hope and inspiration. It passed. But the loss of loved ones lingers.

We created the first joint marketing effort in Lincoln Center’s history: The Performing Arts Sampler Series (PASS). And we took great delight in promoting new audience initiatives and young people’s concerts. We marketed American Ballet Theatre during a stellar decade leading to its 75th anniversary and beyond.  We presided over golden ages for the likes of The Jewish Museum, The Brooklyn Museum of Art and Tilles Center for the Arts. Along the way, we did beautifully designed exhibition advertising for The National Museum of the American Indian and Liberty Science Center. And we helped bring Swann Auction Galleries to the fore.

At a certain point, we decided that advertising could and should no longer look or feel like advertising. We pioneered the concept of 3-D Branding — where readers could go deeper into the subject through useful video and multimedia content. Producing more than 40 instructional videos for the College Board and The National Association of Secondary School Principals, we travelled to eleven cities to chronicle the best practices of principals who had turned their troubled schools around. We illustrated what these practices looked like in everyday life. We proved that ideas, more than money, make change happen.

We went beyond merely promoting exhibitions. We began creating them. For Liberty Science Center’s gala honoring Ernö Rubik, Temple Grandin and Oliver Sachs, we coined the name, Genius Cubed. It stuck.  The name led to the “Genius Gallery” a permanent interactive wall exhibition created so that visitors could access the many biopics we made about the honorees who graced the gala over the years.

We were involved with a number of successful Two-and Three-Hundred Million Dollar Capital campaigns for the Bicentennial of the Archdiocese of New York, Columbia University Teachers College and St. Patrick’s Cathedral. In short, we learned and professed a simple dictum: “Great fundraisers don’t fundraise. They simply share a vision.” The full-page Inner-City Scholarship Fund ads created for The New York Times featuring the remarkable Cartier-Bresson-like photos of agency partner, Anne van der Does worked like magic. Just by looking at these transcendent pictures, readers were able to see the pure and honest potential of the children. They made that vision their own. Millions of dollars in donations large and small came in. We’d realized another basic tenet of our approach: “Donors have needs, too.”

During all the years, we’ve invented more than a few expressions. We’ve lived by our motto: “Say Less. Tell More.” In a subway ad, we coined the phrase “Do Good. Do Well.” How fulfilling to see so many large corporations not only using the expression, but also doing their best to live up to it. We, for our part, were everywhere doing everything. When, for example you arrived at Sands Point Preserve Conservancy because of a logo identity and a website we created, you walked into a Visitor Center we designed. Through the next door, you moved into an exhibition we created called “May We All Grow Up to Be Children” based on a book by George H. Lewis and A.D. Lubow.

Which leads us to the next chapter in our story.

We are now passing the torch to M+, the successor agency under the leadership of Nico Marcellino. AD Lubow for its part is scaling back and moving up to tell and animate the stories of the real and imagined heroes we hope will help humanity evolve into a more peaceful, spiritual and sustainable world. In an age of dangerous polarity, we will be a voice for “fervent moderation.” Remember what William Butler Yeats wrote when the world was caught up in the noise of overzealous conceit:

Turning and turning in the widening gyre

The falcon cannot hear the falconer;

Mere anarchy is loosed upon the world,

The blood-dimmed tide is loosed, and everywhere

The ceremony of innocence is drowned;

The best lack all conviction, while the worst

Are full of passionate intensity.

In these most troubled times, the world needs to take a breath. And good-natured people must speak up with fervent calm on behalf of enraged innocence.

The Boy and a Boy King will point you to the majesty of childhood and imagination—hopefully for the benefit of all adults. Be on the lookout, too, for Beyond Any Race, the story of two boys who grew up in WWII America and Germany who made a hero’s journey from enemies to Olympic competitors to friends and ultimately teammates, proving that in the end one’s generation and humanity mean so very much more than nationality. And if you simply need to brighten your day, see the animation: The Chipmunk and the Violin.

Today, we turn the page and walk gladly into a new chapter, guided only by ebullient thoughts and the airy clouds of gratitude.